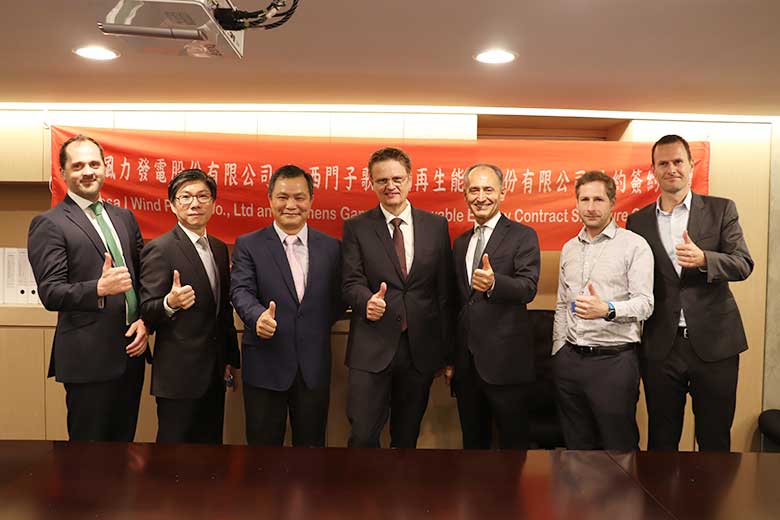 On April 3, 2018, Formosa I (the development of which was directed by Swancor) signed an engineering, procurement, and construction (EPC) and operation and maintenance (O＆M) contract with Siemens Gamesa for 20 Formosa I Phase II 6MW wind turbines. The two companies will be working together to build Taiwan’s first offshore 128MW demonstration wind farm.

Located approximately 2 – 6 km off the coast of Miaoli County, the Formosa I wind farm is developed in two stages. Two 4MW wind turbines were installed in October 2016 for the first stage and officially entered commercial operations in April 2017. The second phase involves the building of 20 6MW wind turbines. This work is expected to begin in 2019 and power generation and grid connection is expected to be completed at the end of 2019. The total power generation capacity for Formosa I is 128MW, which means that the annual power generation capacity can supply 128 thousand households, and the reduction in carbon dioxide is equivalent to that absorbed by 609 Da’an Parks.

The EPC, O&M, and financing knowledge of Swancor, Macquarie Capital, and Ørsted was used in the development and construct of Formosa I and to create a major new milestone for Taiwan’s offshore wind power generation.

Chairman Robert Tsai of Swancor and Formosa I states: “With the successful completion and operation of the two demonstration wind turbines, Swancor has given Taiwan access to crucial construction and operation/maintenance capabilities in Europe’s offshore wind power generation and development, as well as realizing domestic production for the industry. Today’s contract signing with Siemens is a major step for the 128MW demonstration wind farm to be built next year. Using this strong foundation, Swancor will continue to support Taiwan’s green energy policy and work to complete the building of a 378MW offshore wind power generation facility in 2020. In the meantime, Swancor will continue to promote the localization of the offshore wind power generation industry in Taiwan. We feel deeply honored to be the first to build a demonstration wind farm in Taiwan and set a foundation for the sustainable development of Taiwan’s renewable energy.”

The total installation capacity of Formosa I is 128MW; the first phase commissioned in 2017 having a capacity of 8MW; the second phase, to be completed in 2019 will have capacity of 120MW.